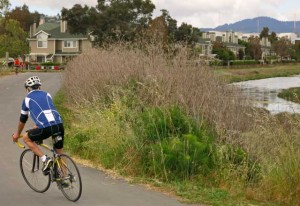 The outer edges of the city along Belmont Slough and San Francisco Bay are protected undeveloped marshland or bay front.  See Map below.   Here, along the top of the levees, is where the Foster City portion of the San Francisco Bay Trail runs.  Between the path and the Bay is where resident shorebirds congregate and migratory waterfowl rest and nest.

You can easily get on to it from three parks right on the trail (e.g., 3d Ave Park, Destination Park, Werder Park) as well as other neighboring streets and parks  (e.g., Port Royal Park or Sea Cloud Park).

As shown, the Bay Trail leaves Foster City at the north end near Seal Point Park in San Mateo where it continues on north to Coyote Point & the Airport.  The southern portion leaves Foster City north of Oracle Bridge where it crosses Belmont Slough to the trails of Redwood Shores). 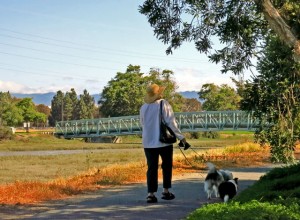 Walking SF Bay Trail with the dogs. Oracle Bridge is in the background.

When walking we usually take the southern end because it is less windy, better landscaped, shorter and meandering,  and has more optional routes.   We generally start at Port Royal Park and go southwest along Belmont Slough towards Oracle Bridge.  There you can cross Oracle Bridge to get to Redwood Shores;  or, you can keep heading on to the Belmont Conference Center & Sports Complex (you’ll see several baseball diamonds here) and even continue on via an overhead walking  bridge across Hwy 101 to Ralston Ave in Belmont.  Another option starting from Port Royal Park is to head due west  along a straight canal that will take you to more trails at the southern end of O’Neal Slough/Marina Lagoon.

When we are riding bikes we usually start at the northern end of Foster City, on Beach Park Blvd just south of San Mateo Bridge. (Note: it can be windy and/or sunny).   From there head north past the kiteboard surfers who are adjacent the Golf Course, leave Foster City limits, keep on going through Seal Point Park, and continue to Coyote Point Park.   Coyote Point Park is a good place to stop to look around and relax before returning.

Our DOMAINs are FOR SALE!
Click for weather forecast